Kara of Germany (real name Michael Steiner) began juggling as a child. Early on he adopted the props of what would become known as the gentleman juggler. He juggled top hats, canes, and cigars at first, then moved on to everyday objects such as napkins, coins, umbrellas, eggs, candles, and more. 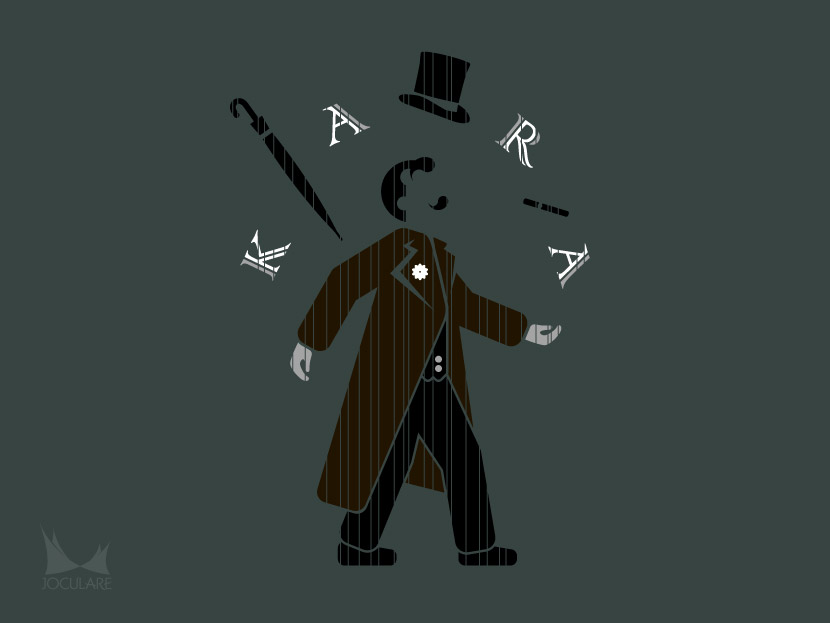 Kara is the second oldest juggler in my Innovative Jugglers series, so I wanted to give this poster an older feel. The colors are darker and muted, and I added a series of vertical scratch lines atop the image which allows it to blend into its background.

The entire form of Kara’s frame has been simplified and stylized. His head is represented only by his hair. The slight curl toward the front of his head is the exact same shape as his moustache (only larger, upside down, and reversed).

The font used for Kara’s name is Colonna. As each letter is formed by two separate segments, I made the secondary segment of each a shade of the background color, thus merging the text with its setting.

The key element of this design is the flower on Kara’s lapel as it is located at the center point of the circle formed by the name and the juggled props.

Note also that each of the juggled props contains exactly one thin element that dissects the prop, such as the hat band. This commonality gels the three items.