Sergei Ignatov is a childhood hero of mine. When I was a teenager, he was still in his prime. This Russian juggler was known as “The Poet of Juggling,” and was solid with numbers, performing 11 rings regularly. 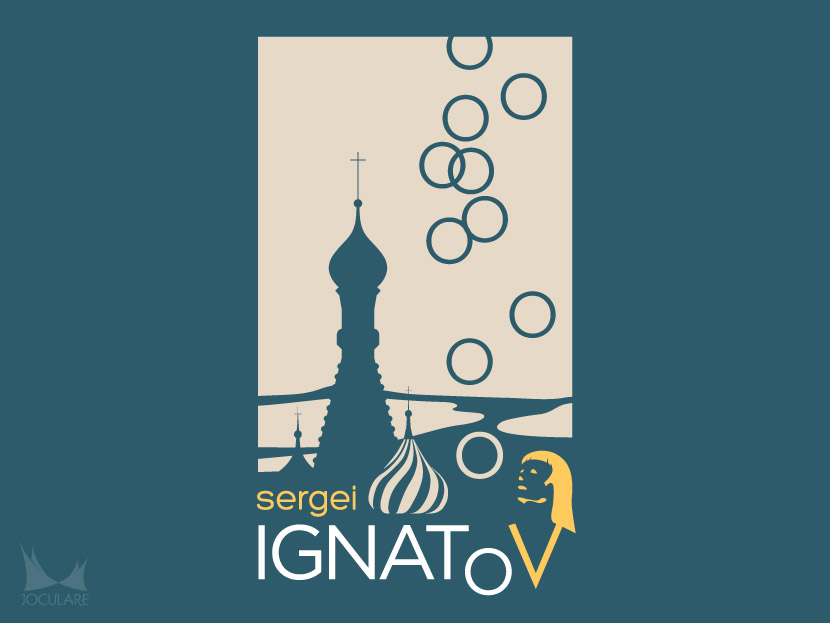 Let’s start with the obvious. This poster prominently features Sergei Ignatov’s homeland of Russia. In the background is Saint Basil’s Cathedral which is in Red Square in Moscow. There are other Russians in this series, but most left the country early in their lives. None are as identified with Russia as is Ignatov.

The height of the cathedral’s top-most spire helps keep the height of the ring pattern from being unbalanced with the rest of the design. Plus it adds distance and drama to the pattern as it creates the illusion of depth.

The bottom two rings are light-colored, while the upper rings are reversed out of the sky and are dark. This creates a natural visual transition from the text to the background and sky.

The final two letters of Ingatov’s last name become part of the action. The O is the bottom-most ring in the pattern and is slightly smaller than the other letters and has a lower baseline in order to indicate this. The V forms the neckline of Sergei’s shirt, which is very much indicative of the outfits he wore. Making both the V and Ignatov’s head yellow helps highlight this combination and the man himself.

A rule I have for this series is there should be no open composition, meaning the design should not bleed off the edges. But here I still have the feel of an open composition as I’ve created a blocked area in which everything is contained and out of which the sky, clouds, and one ring bleed.