Rudy Horn is a German juggler whose most famous segment involves him kicking up a series of teacups and saucers to his head, stacking them as he goes. As a final step he kicks a teaspoon into the top cup. And this all happens while riding a unicycle. But in my mind, an equally impressive talent was his ability to kick a teaspoon into a balance on his forehead. 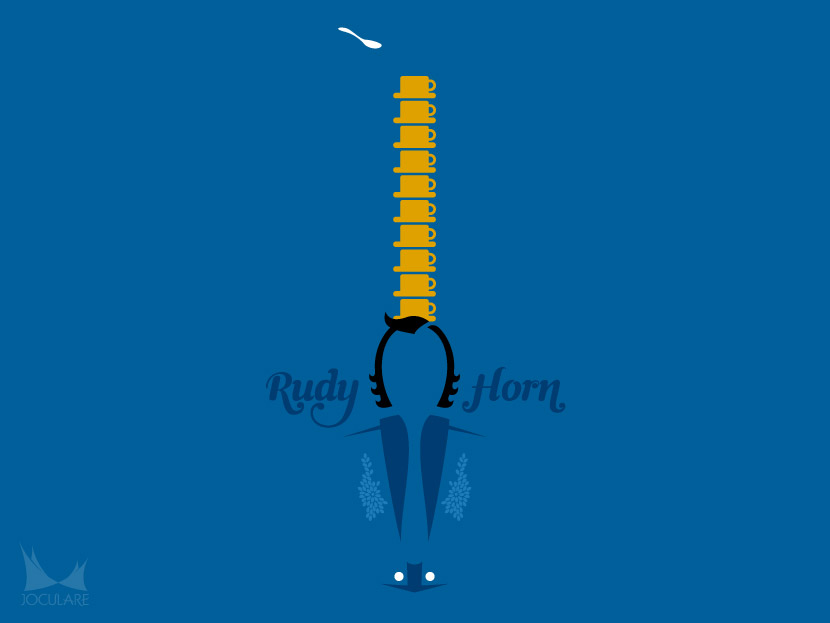 I created a first version of this poster very quickly. It was simple and clean. But my solution felt too obvious, and it featured the unicycle too prominently. Plus it didn’t show the performer himself in any way and that’s a requirement I made for this series.

I scrapped it and started again. The unicycle aspect of his signature trick is great, but it’s more about the teacups and that would be my focus. That, and the amazing blue 70s-style jacket he often wore.

So here we see the final moment of his act as the teaspoon lands in the top teacup. But that teaspoon appears elsewhere. For in the negative space of his head and the negative space between his lapels we have the shape of a teaspoon. It’s still a simple and clean design, but the visual pun with the teaspoons gave this design my seal of approval. And the floating teaspoon at the top adds a fun moment of action and anticipation.

The two white buttons at the bottom of his jacket add balance to the white teaspoon.

The treatment of his name was implemented as a last step. The piece was so symmetrical that it made sense to keep the positioning of his first and last name symmetrical as well. The main challenge was finding the right font. I went with Cazon. I didn’t want anything too stiff or blocky. Cazon has the perfect touch of playfulness that balances well with the curls on the back of his head and the flourishes on his jacket, without being distracting.