My wife and I like to talk about collaborating on artwork. Occasionally we actually start a project. But it’s rare that we actually complete a collaboration.

So it was with dubious spirits that we agreed to work on a collaborative piece for a juried exhibit at the Lebanon Picture Frame & Fine Art Gallery in Lebanon, PA. Kate already had a working relationship with the gallery and learned they were having an exhibit with a theme of architecture within the Lebanon city limits.

One Sunday after church we dropped off our 9-month-old with my parents, then wandered the snowy downtown landscape of Lebanon looking for inspirational architecture. We had a few ideas in mind, but when we discovered St. John’s on Willow Street, we both agreed that would be our subject.

After kicking around ideas on the shape our collaboration would take, we decided to each take half of the façade—I’d take the left and she would take the right. Kate worked in collage as usual, and I worked with wood as usual. Taking a weathered 4×4, I cut 18 half-inch cross sections and arranged them into a 3×6 grid. This would be my surface.

I didn’t know where I was going from there. I had less than one week to complete the piece, so I had to make the first steps without truly knowing my desired destination. And that can be a good way to work, as you approach the next step in the process with a set of limitations. It forces you toward creative solutions and that can lead to great results.

I proceeded to create makeshift stencils and apply block printing ink. My side had much more empty space to work with than Kate’s side as the tower on her side was much higher than mine. I remembered the doorknobs on St John’s three main doors contained background metal plates with very unique and playful filigree. Using a photo I had taken as reference, I filled the entire sky with this pattern, which created nice contrast to the relative simplicity of the building shape and the building details.

The only complex detail was found in the stained glass windows, which I represented using simplified patterns of gold based on the actual stained glass designs. Kate then used these same stencils on her side, which was much more colorful than mine. While my artwork was very neutral, it did share one pop of color with Kate’s, and that was the doors which were a brilliant red. Putting the pieces side by side, the ultimate vision was realized.

For just as the body is one and has many members, and all the members of the body, though many, are one body, so it is with Christ. For in one Spirit we were all baptized into one body—Jews or Greeks, slaves or free—and all were made to drink of one Spirit.

Enjoy photos of the artwork below, along with a two-minute video documenting the creation process. 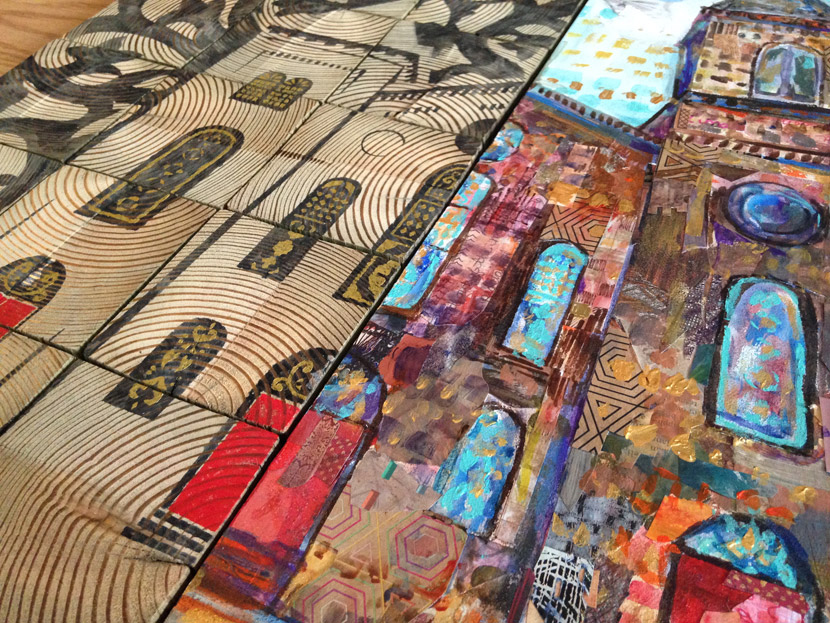 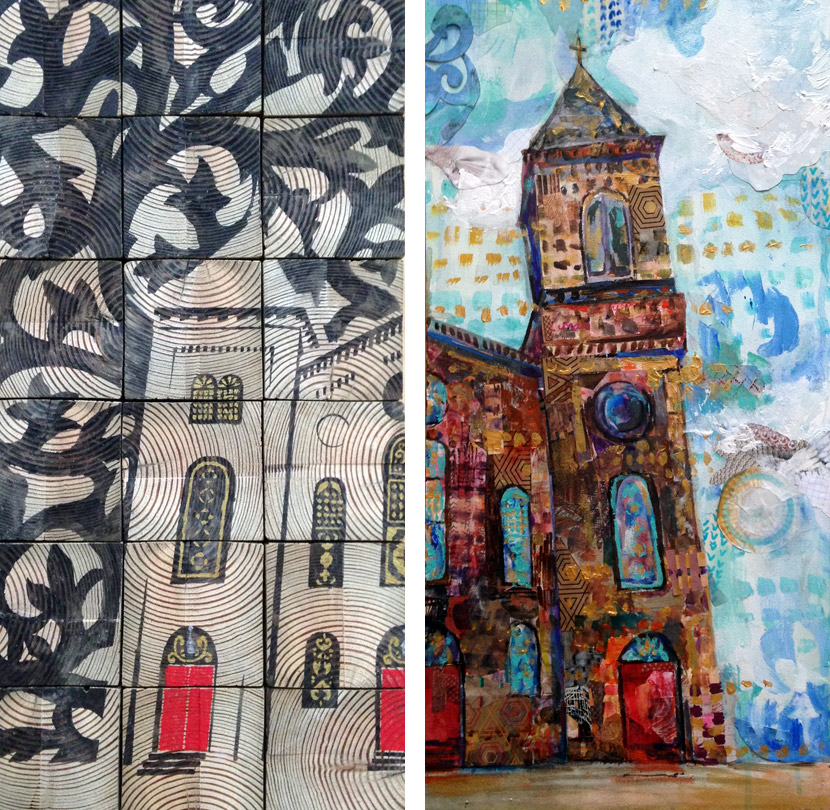